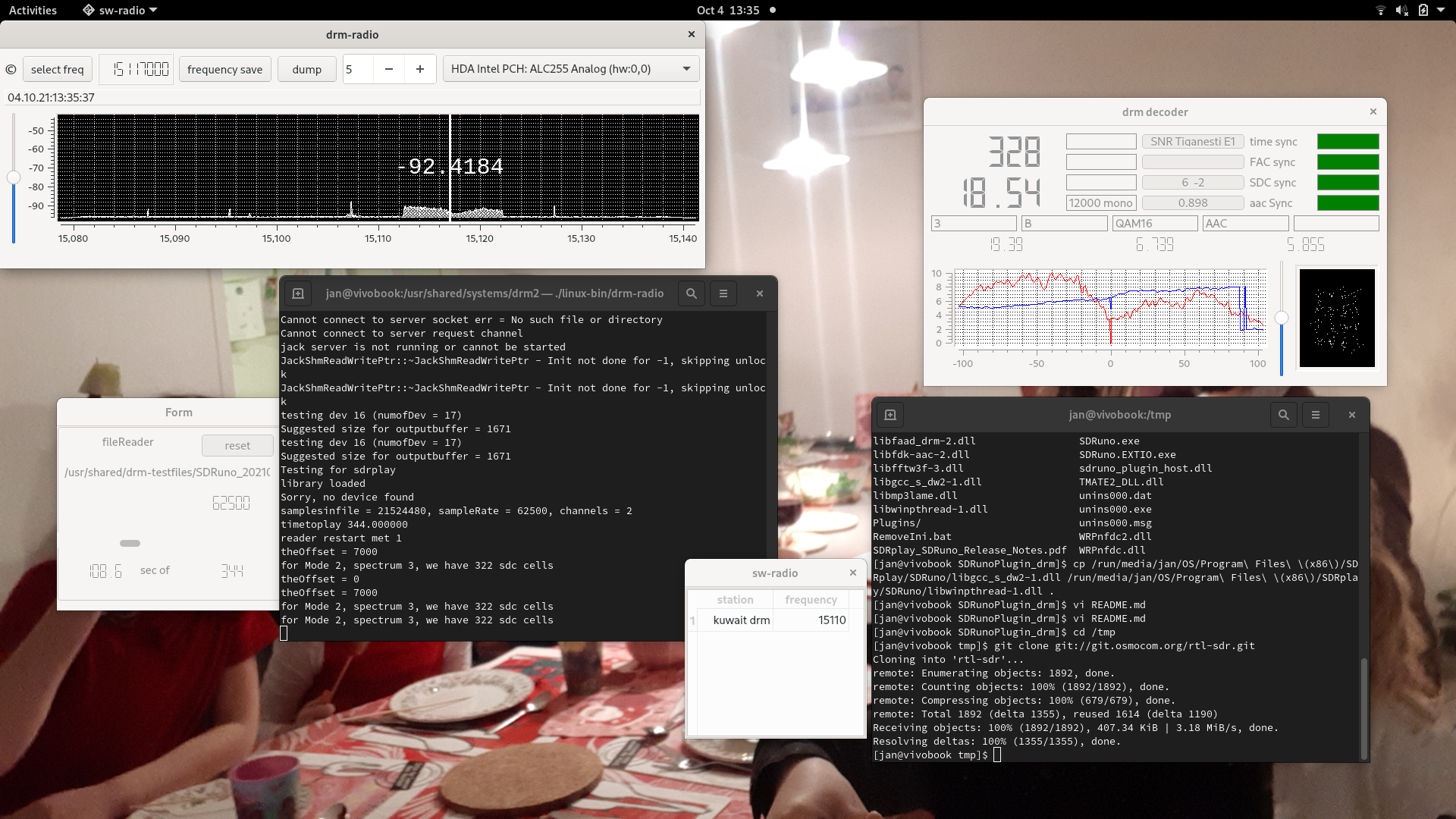 A Note on DRM

DRM, Digital Radio Mondiale, is a form of digital radio. Transmissions are relatively scarce here in Western Europe, but is seems that elsewhere there is an increasing interest.

For DRM signals there are different Modes and Spectra, here in Western Europe (few) transmissions can be received in Mode B, with a spectrum of 10 KHz. Other spectra are 4.5, 5, 9, 18 and 20 KHz. Different Modes are defined such that they perform optimal with given fading patterns.

Other than AM signals, the spectrum of a DRM signal is not centered around a clear carrier, the spectrum looks more or less like a "block", as seen on the picture.

The picture shows the spectrum and the waterfall of a transmission of Radio Kuwait. The transmission is Mode B, spectrum 3, i.e. a width of 10 KHz.

The DRM basics are defined in terms of a sequences of 12000 (complex) samples per second. Each complex sample then tells the amplitude and the phase of the signal at the sampling time.

The DRM signal is then defined in terms of symbols or words, symbols are then grouped into frames. Modes differ in the structure of these symbols. The most common mode, mode B has words of 320 samples. The prefix length is 64 samples, these prefix samples are a copy of the last 64 samples of the symbol. In other modes, the wordlength and the prefix length may differ. (Such a prefix, a copy of the last samples of the word, is very helpful in determining both the first sample of a word as well computing the frequency offset of the signal.)

The 256 "useful" samples of the word in Mode B, i.e. the samples in the word, not counting the prefix, are - using an FFT processor - mapped onto values (carriers) in the frequency domain.

These "words" with frequency domain values (carriers) are then the basis for defining the content. As always, not all carriers carry useful information, for Mode B and Spectrim 3, only 206 of the 256 carriers contribute to the content of the transmission, the remaining ones, 25 on each end of the spectrum, are (supposed to be) zeros.

Such as frame then has 3840 cells with complex values, with 3090 cells with useful values. Note that in the time domain the frame takes 4800 samples (the prefixes), and with a samplerate of 12000 samples a second, there are less than 3 frames a second. 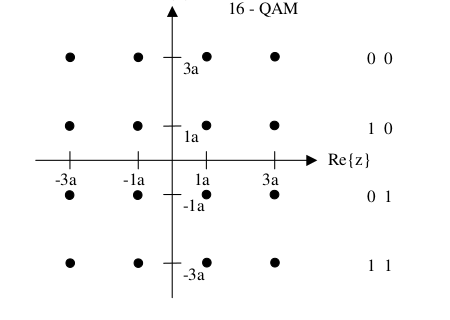 The picture shows the constellation of an ideal QAM16 signal, the (reconstructed) signal value should match one of these 16 positions as close as possible to extract the 4 bits. Obviously, for QAM64, the constellation defines 64 different values.

A frame in DRM contains three types of values, stored in predefined locations in the DRM frames.

A group of three subsequent frames forms a so-called super frame, The FAC in the frame will tell whether or not the frame is the first or the last one in the superframe. Only the first frame will contain the SDC bits. A superframe contains data, good for 1.2 seconds of audio. Audio is encoded in an HE-AAC variant.

What must be realized is that all data in FAC, SDC and MSC is protected against errors by using viterbi encoding, while each individual segment carries a CRC checksum.

A note on decoding DRM

The decoder gets as input a sample stream, in our case the sample stream has a rate of 12000 complex samples a second.

Of course, the first question that needs to be solved is what mode and spectrum occupancy the transmission has and where do the "words" start.

The Mode can be determined by correlation, the length of the prefix, mentioned before, is different for each mode. Mode detection is then simply by correlating the prefix with the supposed end of word and finding the best match. In order to get a more reliable result, the process is done over a range of words rather than just a single one. Experience shows that correlating over 15 to 20 lengths of words gives a reasonable result.

Of course, by detecting the mode, the first sample of a word is detected simultaneously. A minor issue, though not unimportant is that there might be a clock offset in the decoder compared to the clock in the transmitter. This might imply that after the transmitter has sent a number samples, the receiver may be one or two samples off. So, continuous monitoring that the time synchonization is still OK is a must.

The type of the spectrum - defining the width - can be deduced from the words in the fft output. Looking at the strength of the carriers in the FFT output, and noticing a strength difference is the way to go. (Note that while the FFT was done over 256 elements (using mode B), the outermost elements have (should have) an almost zero amplitude, for mode B only the central 206 out of the 256 carriers contain useful information.)

Happily, some values at predefined locations in the spectrum have larger, known, amplitudes and given phases. By comparing the spectrum as computed with the spectrum as it should be, the decoder can detect the frequency offset,

By comparing the phases of the sample values in the prefix and the corresponding sample values at the end of the time domain words. a more precise error can be computed and corrected.

Of course, if the frequency offset is larger than the carrier distance (as said, for Mode B app 46 Hz), the carriers in the spectrum contain the wrong values and decoding is impossible. Conversely, if decoding is possible, then obviously, the frequency correction is more or less OK.

So, the decoder has to deal with

extracting the MSC bits and from them the bits for the selected service, and decoding these bits, usually AAC encoded audio.

The decoder contains labels to show the correctness of the time synchronization and the FAC, the SDC and the AAC decoding. 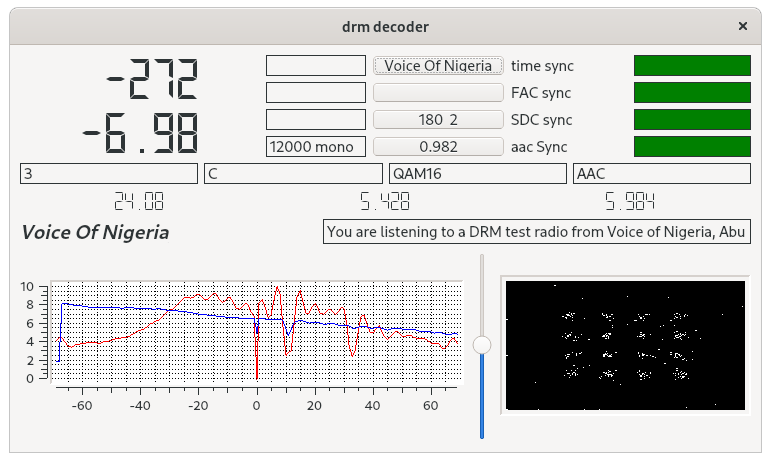 The picture of the decoder gives quite some information about the received and decoded signal.

it can be seen that there is a single service being transmitted (the software is able to handle 2 audio transmissions), here Voice of Nigeria.

Below this, there are 3 numbers, giving some information on the quality of the signal. The values are derived from the deviation of the values as measured to the values as they should be. In general: higher is better.

The scopes at the bottom give some visual information about the signal.

The scope right gives the constellation of the restored signal. The 16 dots of the QAM16 signal are clearly shown.

For the drm-receiver both an AppImage (for Linux-x64) and a Windows installer are available on the releases section of this repository. AppImage and Installer are compiled with SDRplay (2.13), DABsticks and Hackrf devices configured. 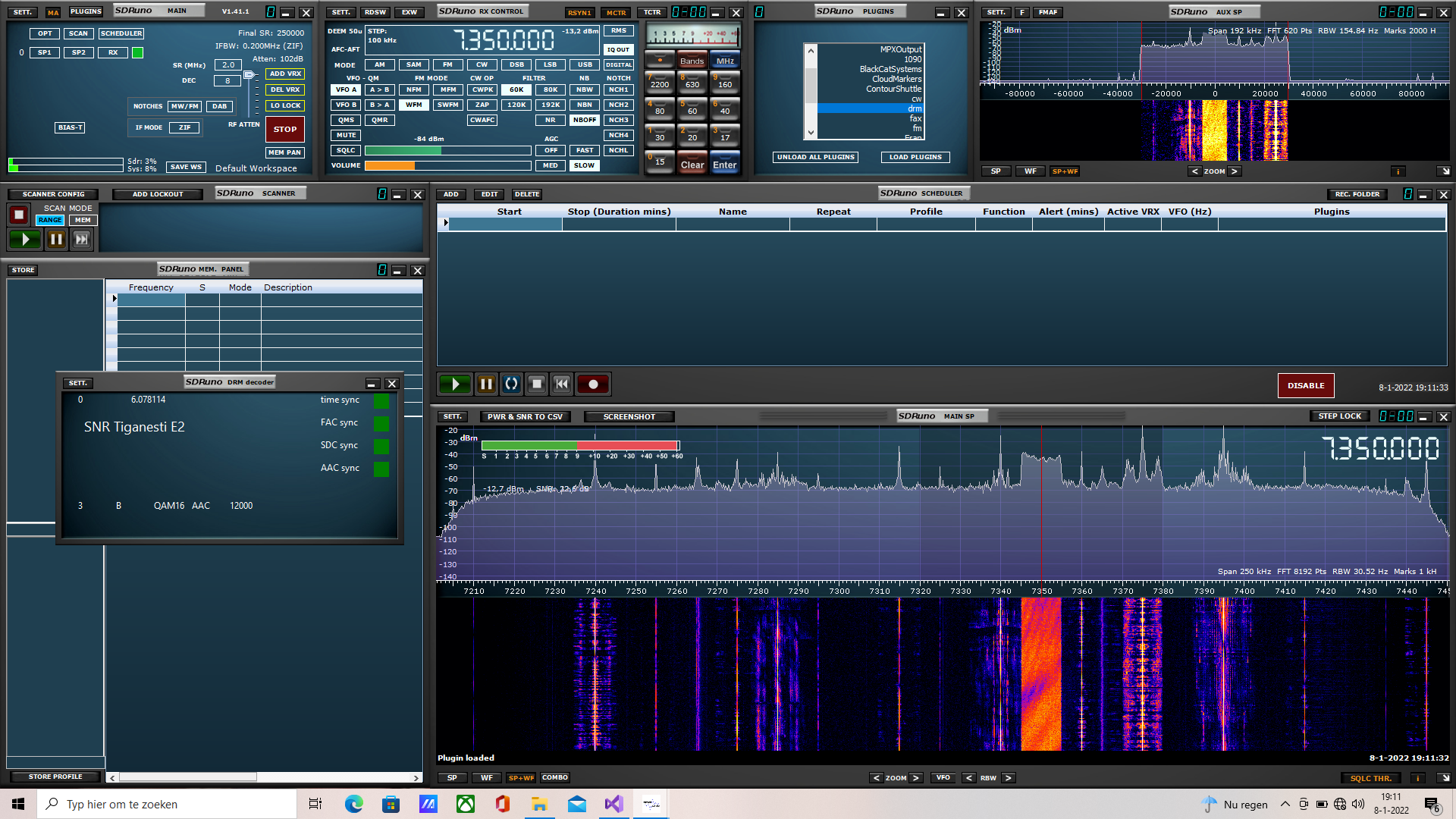 For Windows, SDRuno (see above) is a software radio package, developed for all versions of the SDRplay RSP's. To support DRM decoding a plugin is developed and available.

The plugin - and the sources - can be found here .

On shortwave there is more to do than just DRM. As a matter of fact, there are only few DRM transmissions. Here we hear in the afternoon Kuwait radio, and in the evening RRI Radio Romenia International for an hour or so. The sw receiver - from which the drm-receiver is derived - was equipped with decoders for e.g. PSK, RTTY, etc well before a DRM decoder was built.

The currently implemented decoders are:

The releases section of this repository contains - next to the sources - a Windows installer and a for Linux-x64 an AppImage.